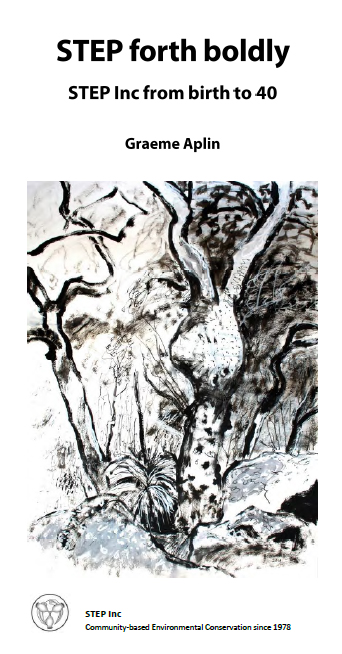 In 1986, STEP incorporated with the name STEP Inc. STEP is not an acronym.

STEP was originally the South Turramurra Natural Bushland Conservation Society, formed in 1971 to fight Ku-ring-gai Council's plans for a garbage tip in the Lane Cove Valley between Canoon Road and Cove Street. This proposal was defeated but later morphed into a development proposal for a complex of community halls, sports ovals and courts.

Click here for a copy Out of STEP: An Account of South Turramurra's Opposition to Ku-ring-gai Council's Proposal of Building a Major Netball Complex in the Area in 1978 (Dokulil, 1984).

In 1978 Ku-ring-gai Council pressed for a complex of netball courts. The South Turramurra Natural Bushland Conservation Society assembled to form South Turramurra Environment Protection (STEP). In 1986 STEP became an incorporated association with the name STEP Inc and its objectives were enshrined in its constitution.

In 1999 KUBES merged with STEP followed by the Thornleigh Area Bushland Society (TABS) in 2007. TABS was established in 1987 out of concern about threats to, and degradation of, the bushland around Thornleigh. TABS brought to STEP two new committee members and strong ties with Hornsby Shire Council and bushcare in the Thornleigh area.

In 2018 STEP celebrated it's 40th anniversary. To commemorate the event, Graeme Aplin collected some oral histories and wrote a history STEP Forth Boldly: STEP Inc from birth to 40.