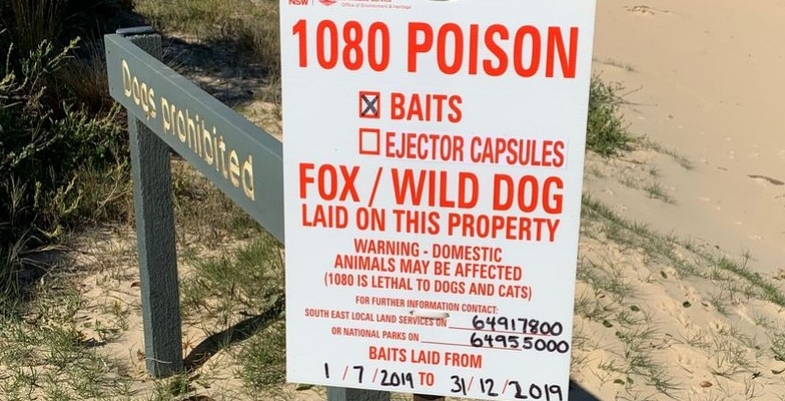 We are all aware of the impact that the use of 1080 poison has had on the local population of feral cats and foxes. We now have a lot more wildlife in the suburbs that may be a delight or may be a nuisance, for example brush turkeys. It is being used extensively in bushfire affected areas to help wildlife recovery. It has the advantage that baits can be dropped into remote areas. It is generally believed that native animals are immune to this poison as it is present in a range of Australian plants.The  has released a report, 1080: A Weighty Ethical Issue that looks at the ethical considerations of using 1080 to control feral animals in Australia and finds that the conservation benefits to native species necessitates its use until an alternative is available

Here is the ISC’s summary from the report.

1080 – sodium monofluoroacetate – is very important for conservation in Australia, used extensively to protect rare native species from foxes, cats, pigs and rabbits. But many people oppose its use because it is regarded as inhumane.

In this report the Invasive Species Council considers the conservation and welfare consequences of 1080 baiting. We do this as an environmental organisation whose mission is to strengthen protection for Australian species from harmful introduced species, but also as people who care about the welfare of animals, whether introduced or native.

Diagnosing pain and distress in animals is difficult, and there is much uncertainty about the welfare impacts of 1080 poisoning, because the extent to which animals are conscious during some of the worst symptoms is unknown. However, it seems highly likely that 1080-poisoned animals suffer pain and distress before they become unconscious, although the extent and duration are highly variable and poorly understood. A 2010 assessment by an independent expert panel in New Zealand concluded that 1080 had severe to extreme impacts on the welfare of the species assessed (including cats, pigs and rabbits) lasting from hours to days.

1080 has been essential for enabling the survival or recovery of many threatened species and their reintroduction to sites where introduced predators have been suppressed or eradicated.

The use of 1080 also has welfare benefits for native animals who are freed from the pressure of heavy predation or competition by introduced animals. A ban on 1080 without an effective replacement would overall result in greater suffering (as well as declines in native species).

As a high priority, we recommend research into effective replacements for 1080 that are more humane. Four new more-humane baits have been approved in Australia since 2016, but they cannot totally replace 1080 due to their nontarget impacts and limited delivery options.

The ISC believes that an ethical approach to the welfare problems of 1080 requires the following: