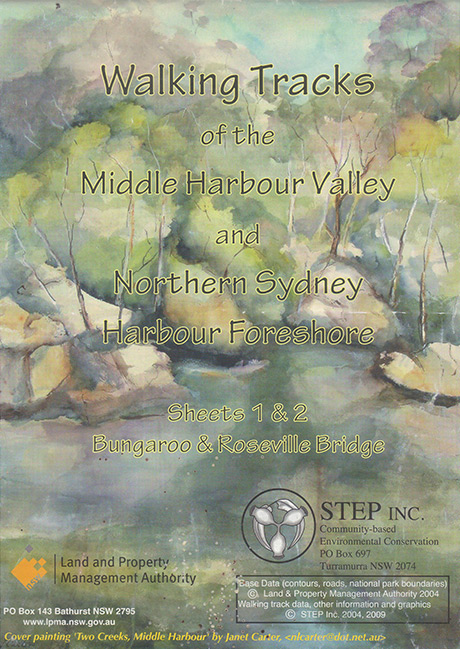 Note 1: We're currently offering free membership which entitles you to a 30% discount – just follow the instructions on the checkout page
Note 2: To avoid paying postage, contact This email address is being protected from spambots. You need JavaScript enabled to view it. to arrange cash payment and pickup from South Turramurra
Note 3: If you pay using PayPal you don't need a PayPal account

The full-colour, double-sided map is of the northern section of the Middle Harbour Valley, from Bungaroo to Roseville Bridge.

It shows bush tracks, cycleways and fire trails with connecting streets and access points. It is an excellent references and suitable for all users, from the occasional suburban stroller to the dedicated bushwalker. At a scale of 1 cm to 100 m (1:10 000) the level of detail is ideal for anyone wanting to explore the bush with beautiful colour photographs illustrating places of interest.

John Martyn was born in Cornwall and came to Australia in 1970 after mapping in the Rift Valley of Kenya for his PhD in geology. Although he has lived in Sydney since 1979, much of his fieldwork as a minerals exploration geologist over the last 30 years has been in Western Australia.

His first experience of spring in the West Australian goldfields left him stunned by the colour and variety of flowers in the bush. It was the beginning of a lifetime enthusiasm for Australia’s flora and fauna.

Moving to Sydney, John was amazed by the beauty and variety of landscape and habitats around the city’s suburbs. He has been exploring, mapping and photographing Sydney’s natural world ever since.

John joined the STEP committee in 1990 and has dedicated many hours to STEP’s campaigns and publications. John has assisted spreading STEP’s name and aims through the publication of the following books and maps of walking tracks:

John has also coordinated our walks and talks programs, with himself leading several very informative and eye-opening walks. In recent years, John has chosen wide-ranging landscapes such as Deep Creek at North Narrabeen, Kurnell and Botany Bay National Park, Dog Pound Creek and the Hornsby Diatreme, Ku-ring-gai Chase National Park at West Head, Cumberland State Forest and Bents Basin. The popularity of his walks for STEP has led John to host walks for Hornsby Shire Council.

It would not have been possible to produce this map without the help of of a team of dedicated volunteers who checked the details of the tracks and names of streets etc. Their work is much appreciated.