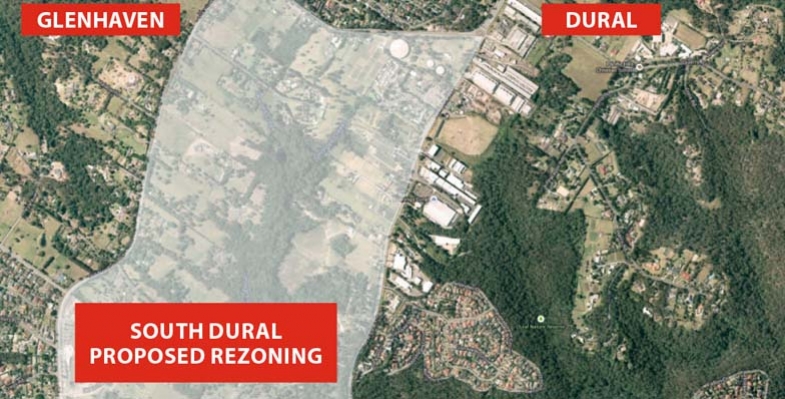 South Dural Residents and Ratepayers Group, a developer initiated lobby group, has made numerous applications since 1990 to Hornsby Council for the rezoning of 240 ha of rural lands in south Dural for urban purposes. The latest attempt is currently under consideration. Click here for details of the history of the lobbying

In the latest attempt, consultants’ reports have been commissioned as part of the first step of the application, that is, to change the zoning from rural to various levels of residential density and recreational zoning. Submissions closed on 2 December.

The spine of the proposed development is an area of bushland along Georges Creek and another unnamed tributary of Berowra Creek. Indeed the developer is touting the natural views and the tall forest as a feature that will allow six storey apartments to fit into an ‘eco-friendly’ community. All in all the proposal is for 2,900 dwellings that could house 9,000 people.

As the opposing residents’ group, the Galston Area Residents Association, points out there are many reasons to oppose the application, for example:

The bushland area comprises about 64 ha, a quarter of the site. As large parts of the land are privately owned it has not been possible to carry out on the ground vegetation mapping. This applies in particular to the area of Blue Gum High Forest of about 10 ha. This is in the context of the total area of Blue Gum High Forest remaining in Sydney of less than 200 ha. Other areas of significant vegetation have not been sampled adequately or consistently.

It is totally unsatisfactory to be asking the public to comment on such inadequate information, especially when dealing with endangered ecological communities.

2. The proposed zoning map does not reflect the described development or the stated purpose to conserve native vegetation

The higher density six storey buildings are planned to be built closest to the bushland but they are zoned R3 (medium density). It should be zoned R4, high density residential.

Most of the riparian areas are described as having high conservation significance so should be zoned as E2. However the proposed zoning is RE1. It appears the intention is to allow a gravity feed sewer to be installed along the creek lines, hardly compatible with conservation. Construction of a sewer would need road access that would damage the natural creek line and, on past experience, create a wide band of weed invasion.

3. Large areas of the zoning proposal are deferred

The deferred areas are the main bushland strips that interface between the residential areas and the core riparian areas. They cover a significant part of the bushland. The reason given is the uncertainty of the biodiversity legislation that had not been passed when the proposal was submitted.

These deferred areas will be hard to manage because of the proximity to the housing development so government agencies will probably not want them.

An absolute tragedy would occur if they were traded for biobanking sites elsewhere as it would be impossible to find equivalent vegetation communities to be restored to offset the losses. They should become areas that are off-limits to biobanking.

The effect of this proposal on the existing vegetation will be very damaging unless very detailed precinct plans to protect it are drawn up and very active and expensive management takes place in perpetuity.

It is unsatisfactory to expect the public to comment on this proposal with incomplete and inadequate information.

Ideally STEP would like this parcel of land to remain rural, but in the event of it being rezoned for residential development STEP would like the potential impact on biodiversity reduced. Possible mechanisms for this include: