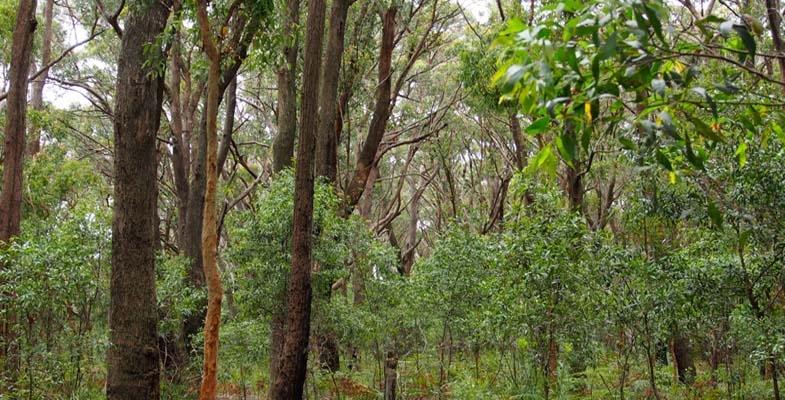 Most people who live in the upper North Shore and who are interested in bushland, or gardening, or geology, or maybe all three, would be conscious of whether they live on ‘shales’ or ‘sandstones’. They might also be aware that the shales generally overlie the sandstones, or so it would seem. But I had a conversation once with a lady who lives at Duffys Forest who believed that she and her neighbours lived on ‘Wianamatta Shales’. Well it was a reasonable assumption – but incorrect!

The shales that were once extensively quarried at Duffys belong to a thick lens some 140 to 170 m above the base of the Hawkesbury Sandstone, and at these levels and geologic times, the meandering, braided river channels that deposited the sands were starting to pond, and flood plain lagoons became more extensive and persisted for longer, accumulating clays that were preserved beneath further layers of river sand; or torn up and redeposited as sand with shards of shale. Eventually the sand was washed down only in intermittent flood bursts; its sand bars invading the muddy lagoons and the sands interlayering with the clays and silts, creating the transitional Mittagong Formation. The clays then took over as the river basin became a swampy, Triassic coastal lowland, and the Wianamatta Group was formed, but more about Mittagong and Wianamatta in later articles.

Hawkesbury Sandstone shale lenses lie sometimes only a few tens of metres or less below the stratigraphic top of the sandstone and they have been mapped and interpreted in different ways over the years. Without drill data it can often be difficult for a field geologist to know if scrappy, lateritised shale floaters and outcrops on a ridgetop are lying within or on top of the sandstone. As such, they were mapped sometimes as outliers of Wianamatta Group or Mittagong Formation, but latterly they have tended to be pushed down into the sandstones. A good example of such ambiguity would be the lateritised shale ridge capping at St Ives Showground, whose topographic setting could fit it into either category. Not only do such shale lenses tend to increase in frequency upwards in the sandstone sequence, but they are more common northwards and towards the coast.

Most lenses are just oversized slivers less than a metre thick and tens to hundreds of metres in lateral extent, and they tend most commonly to consist of laminite: a thinly bedded (mm to cm) alternation of shale, siltstone and sandstone. If you're out and about there are several places you can see them such as the south wall of the Argyle Cut in the Rocks. And on the M2 at Barclay Road overbridge, North Rocks, the NorthConnex guys are excavating a sandstone face with a laminite lens, though this may well soon be concreted over. There's a great example on the cliff top north of Wattamolla, and then there's Beacon Hill, just off Warringah Road, where shale once quarried for ceramics is still visible at the base of the hillside flanking the sports oval. This lens is more substantial and actually yielded numerous fish fossils of freshwater affinity. 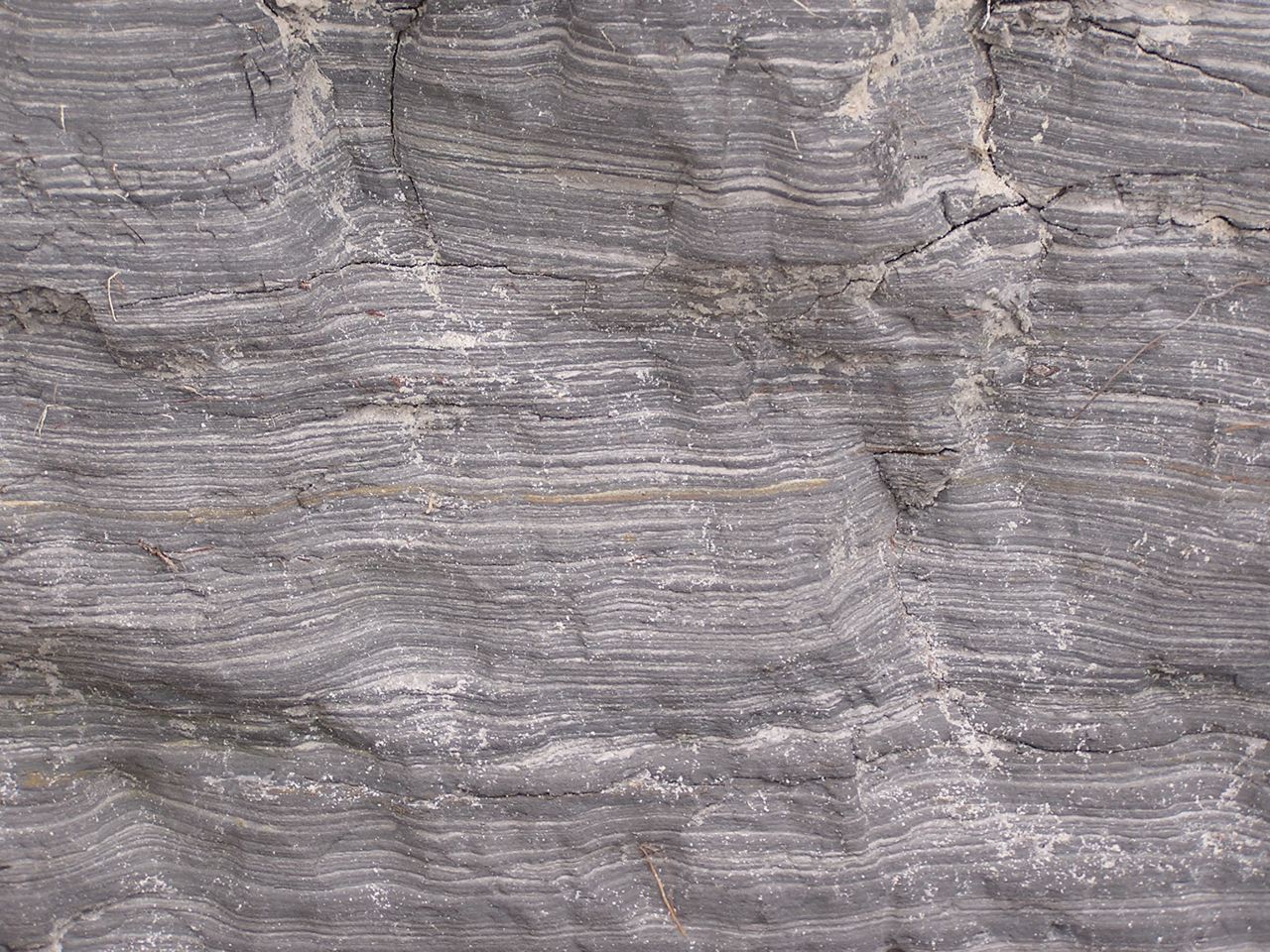 The Beacon Hill shale lens is thick, but not as thick as the Duffys Forest lens which was 35 m thick before quarrying. Thick also was a lens at Lucas Heights which is of the order of 10 to 20 m. Substantial lenses also occur at Canoelands, Kirrawee, Menai and Darkes Forest, and most of these larger ones tend to carry shale and mudstone in addition to laminite. There is a very readable account published on-line by ANSTO of the Little Forest lens at Lucas Heights, in which the author found little difference between its shale and typical Ashfield Shale of the overlying Wianamatta Group.

In terms of area, the larger lenses may originally have covered several square km, though because they were formed in lagoons and oxbows there is a tendency for them to appear long and narrow. The Darkes Forest lens for example extends along its ridgetop for nearly 4 km and the Duffys Forest lens measures 3 km in outcrop from north to south. 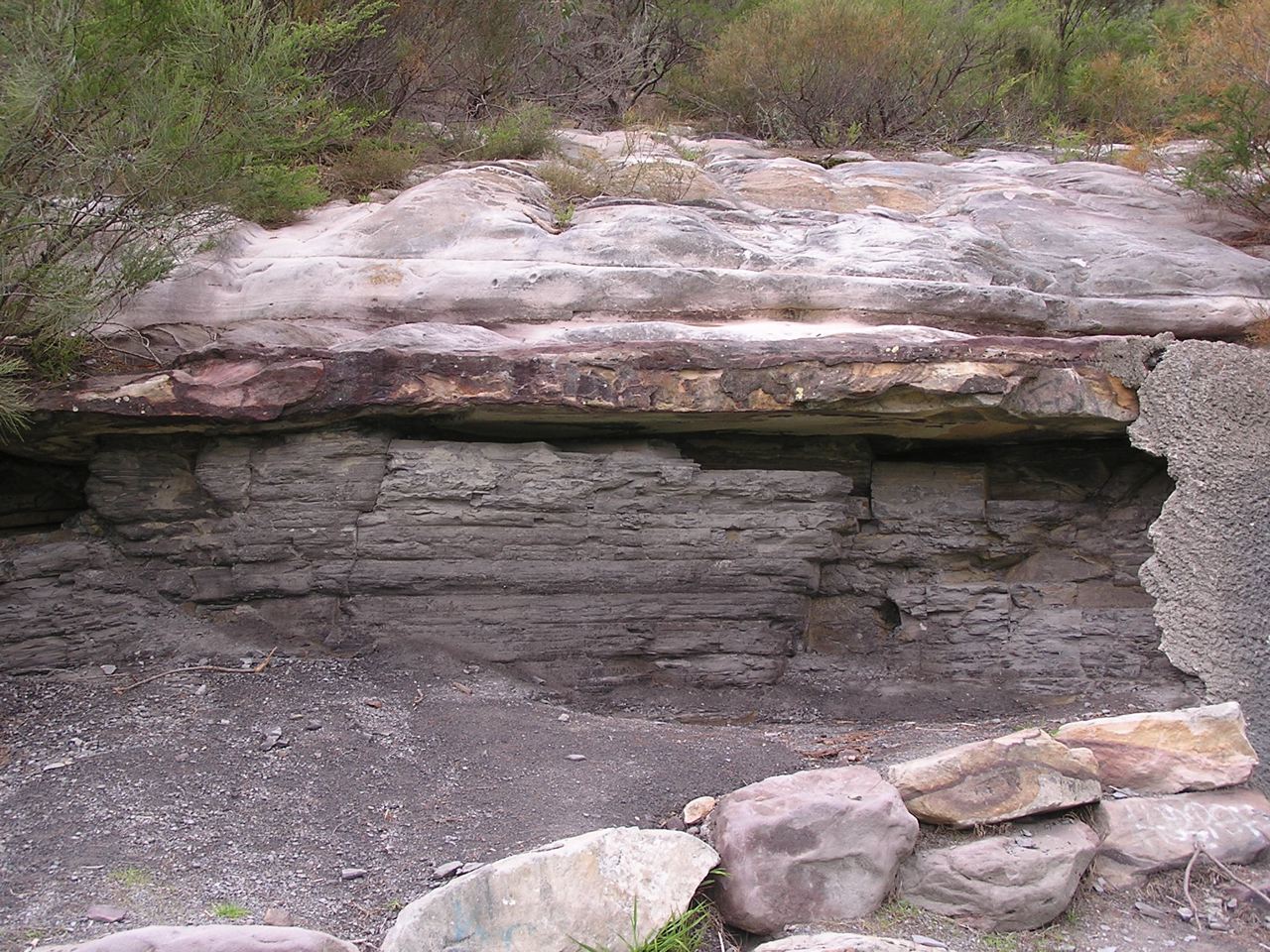 Shale Lenses and their Vegetation

The shale lenses have a marked effect on soils, and this is reflected of course in the vegetation. Shale soils being more fertile have often been cleared for orchards and smallholdings, as at Darkes Forest and Canoelands, though there are significant surviving natural vegetation remnants, as described below.

I first stumbled on Darkes Forest by following the signs to the orchards from the Princes Highway, and was surprised to drive past quite tall forests of straight trunked trees; quite a contrast to the sandstone woodlands and shrublands along the highway. The forests are catchment protected so it's unwise to venture too far in, but it's easy to distinguish White Stringybarks, Sydney Peppermints and Sydney Red Gums shading an open floor peppered with tall shrubs of Two-veined Hickory Acacia binervata and a variety of other species including Gymea Lilies. About 200 ha of this forest remains, and has been declared as O'Hares Creek Shale Forest community and listed as endangered. See photo at the top of the page.

You may drive past the 5 ha Halls Drive Bushland Reserve off New Illawarra Road without noticing it, and be unaware there is any shale in the area, but venture in and you'll see shale fragments in the soil and be confronted with several species of eucalypts of both shale and sandstone affinity. It's probable both White and Common Sandstone Stringybarks are present as are Red Mahoganies, and these are accompanied by Sydney Red Gums and scribbly gums (unsure of species). The last two are perfectly at home on sandstone, but there are also abundant Blackthorns Bursaria spinosa – shrubs more typical of shale terrain. The plant community falls within the broad embrace of the critically endangered Shale Sandstone Transition Forest community.

The 1:100,000 scale published geology map shows a chain of shale bodies running for 10 km along the ridge line between Sutherland and Cronulla. These are almost entirely built over except for some tiny patches of bushland adjoining Kirrawee railway station. These feature grassy woodland dominated by Grey Ironbarks and are a good example of Sydney Turpentine Ironbark Forest.

The only surviving bushland on Beacon Hill itself is totally on sandstone not the shale of the former quarry, but shale lenses mapped around Frenchs Forest nearby carry surviving forest and woodland, though this has been under recent threat from hospital and road construction. A tree that can still be found there is White Mahogany Eucalyptus acmenoides, a shale-loving northern species also common in Edna Hunt Sanctuary near Epping, both areas at the southern limit of its natural range.

This semi-rural ridgetop settlement spreads across sandstone and shale, extending over the old shale quarry which has been manicured into a housing estate, country club and golf course. Much of the shale-related bushland was lost in the quarrying but some survives on its north-east and south-west sides. Whether it's truly Duffys Forest plant community may depend on interpretation, as key Duffys species such as Brown Stringybark Eucalyptus capitellata and Caley's Grevillea Grevillea caleyi are either absent or extremely hard to find there.

Trees that can be found include common species like Red Bloodwood, Silvertop Ash, Common Sandstone Stringybark, Sydney Red Gum and Christmas Bush, with a scattering of Blackbutts and Turpentines. The tree flora has affinities with both Duffys Forest and Shale Sandstone Transition Forest communities.

The shale is heavily lateritised, and iron-rich laterite debris have accumulated downslope on sandstone benches and in hollows. Among the species supported in such sites are a wealth of Proteaceae including Waratahs.

When you walk from Berowra to Berowra Waters you descend to a firetrail that follows the contour. The hillside here has flattened into a broad bench and there are numerous shale and siltstone fragments in the soil. A shale band has created an aquiclude, wetting the soil to support abundant Umbrella Fern groves, plus thickets of the green-flowered Grevillea mucronulata; not a common plant on the North Shore but very abundant here. The Berowra example is a departure from the ridgetop shale settings and threatened, shale-related plant communities, and if any threatened community is represented there it is Coastal Upland Swamp.

The name of this locality is said to derive from timber getters finding stringybark ‘canoe trees’ with scars from bark removal. The stringybark was said to be Eucalyptus cephalocarpa but there are no known localities of this species north of Merimbula. The few hectares of bushland remnants among the Canoelands orchards carry tall straight stringybarks that are most likely E. globoidea. Such remnants have been mapped as critically endangered Turpentine Ironbark Forest in Hornsby Council's surveys.

This is the second in a series of articles by John Martyn on Sydney’s geology. Click here for his article on the Narrabeen Group.