How Should the Flood Risk from the Hawkesbury Nepean be Managed? 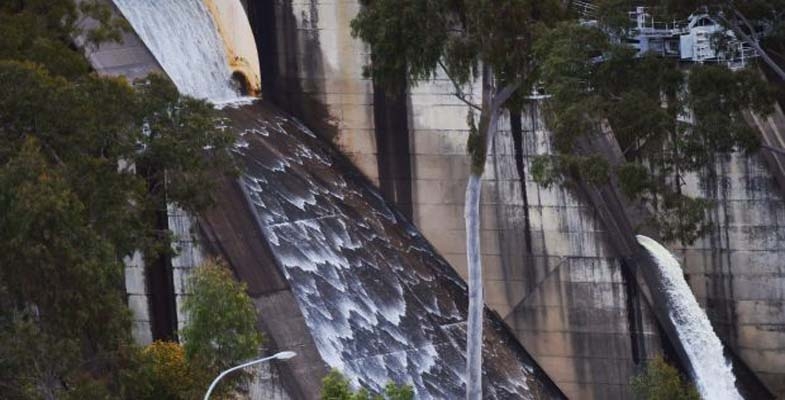 The NSW government thinks that raising the spillway wall of Warragamba Dam by 14 m will significantly reduce the risk of floods inundating homes in western Sydney. But experts have questioned whether the raising will achieve worthwhile benefits and whether the ecological damage can be acceptable. They argue the water levels in the dam storage should be better managed instead.

The first water supply dams built to supply Sydney were the Upper Nepean dams (such as Avon and Cataract Dams) that still provide 20-40% of our supply. When this supply became inadequate the next step was the construction of Warragamba Dam that commenced in 1948 and was completed in 1960. The resulting storage in Lake Burragorang is one of the largest reservoirs for urban water supply in the world.

Following 1988 and 1989 high rainfall years, the NSW government re-evaluated the potential rainfall and flood risks and raised the dam wall by 5 m and constructed an auxiliary spillway on the east bank of the dam.

Back in February 2007 the Warragamba Dam water supply fell to its lowest recorded level of 32.5% after the prolonged drought from 1998. In response conservation measures and water usage restrictions were introduced. The desalination plant was built at Kurnell but this has hardly been used as we have had a period of above average rainfall ever since. Now the concern is flood risk. In 2012 and 2015 water had to be released to prevent a mass overflow. Currently the level is around 91%. 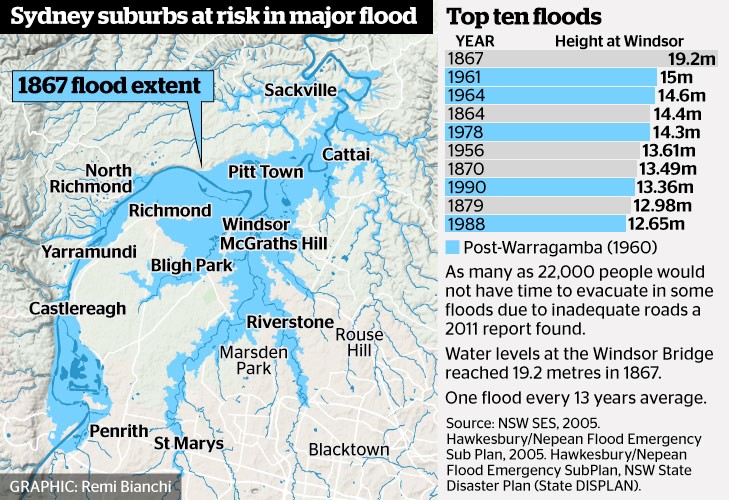 The benchmark for flood risk often used is the worst recorded flood that occurred in 1867 when the water height at Windsor Bridge was 19.2 m. This figure (from Sydney Morning Herald) provides data of past major floods and the flood extent in 1867.

According to the State Emergency Service, the estimated rainfall in 1867 in the lead up to the flood was 770 mm over three days averaged over the entire Nepean River catchment. The flood experience would be different now because several dams have been built in the Nepean catchment.

The review concluded that there is no simple solution or single infrastructure option that can address all of the flood risk in the Hawkesbury Nepean Valley floodplain. The risk will continue to increase with population growth. Evacuation is the only mitigation measure that can guarantee to reduce risk to life. According to the State Emergency Service a flood at the 1867 level would now lead to the evacuation of 90,000 people, damage to 12,000 homes and a cost of $5 billion.

As Prof Paul Boon explained during his STEP talk on 11 July on the Hawkesbury River, the topography of the river valley creates several challenges in understanding and managing flood risk.

The Hawkesbury has two main sources, the huge catchment of rivers that flow into Warragamba Dam that has its own flood plain from Emu Plains to Castlereagh. Then the Hawkesbury starts at Yarramundi when water sourced from the Grose Valley catchment in the Blue Mountains joins the Nepean. There is a flood plain around Richmond and Windsor through to Cattai but then more rivers join in and the valley narrows again with steep sandstone gorges and many twists and turns. This means that floods can bank up and spread out over broad areas of western Sydney.

Recommendations of the Review

Some points from the first review report are:

Even though Stage 2 of the review has not been completed, WaterNSW has been preparing environmental impact statements based on a proposal to raise the dam wall by 14 m and made a referral under the Federal Environment Protection and Biodiversity Conservation Act on specific matters of national environmental significance.

The intended operation after the spillway wall is raised is for water to be held back during a heavy rainfall event and then released slowly in the following weeks. This will provide additional time for evacuation and reduce the downstream flood peak. The stated intention is not to increase the current overall water storage level. 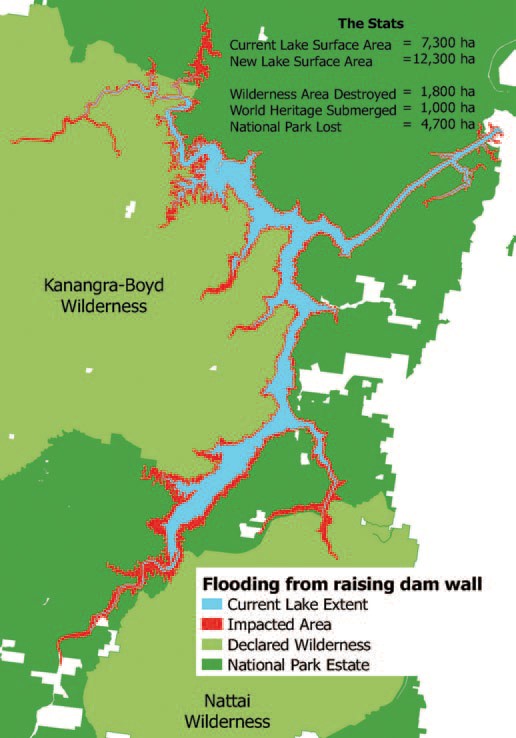 The Colong Foundation for Wilderness has expressed serious concerns about the impact of the current proposals. The fundamental points made in their Colong Bulletin (July 2017) are:

Can the Water Storage Level be Managed Instead?

Assoc Prof Stuart Khan, an expert in water engineering, disagrees with the need to raise the dam level. Management of the water level by controlled releases is a safer option so that the dam is never full. The desalination plant that can supply 15% of Sydney’s water needs, could be put to use when the need arises by way of earlier releases. Basically he disagrees with the review’s conclusions.

This is a fascinating risk management problem. Should we:

Whatever option is taken flood risk cannot be eliminated. However the government is still going ahead with allowing massive population increase in the flood plains of the Hawkesbury Nepean system. As population grows the warning time needed to organise evacuation will increase.

Given the improvement in longer term weather forecasting. The government must explore options for smarter use of risk management techniques to adjust the storage levels. Raising the dam wall ignores this potential and could be a waste of $700 million.

Also future governments could easily be tempted to use the raised dam wall to increase water storage permanently to provide water supply for Sydney’s projected massive increase in population.

As reported in the Sydney Morning Herald on 21 August, coal mining is impacting on the Sydney water supply catchments but the government is not carrying out adequate monitoring.

The 2016 Audit of the Sydney Drinking Water Catchment was tabled in parliament on the quiet. The National Parks Association discovered the report. It revealed that groundwater losses from longwall mining under the catchments in the Woronora areas has not been quantified. This is despite mining company reports have indicated that about 25 to 40 million litres a day have been entering the mines.

The 2013 audit report revealed that research was underway into the connectivity of surface and groundwater but no results have been revealed in the 2016 audit. This is not good enough given that these mining companies are still applying to expand their mining operations under the catchment.

There are also problems with coal mines leaking toxic chemicals into catchment rivers. Examples are the Springvale mine that has been pumping untreated waste into the Coxs River and the closed Berrima mine that has been leaking pollutants into the Wingecarribee River.