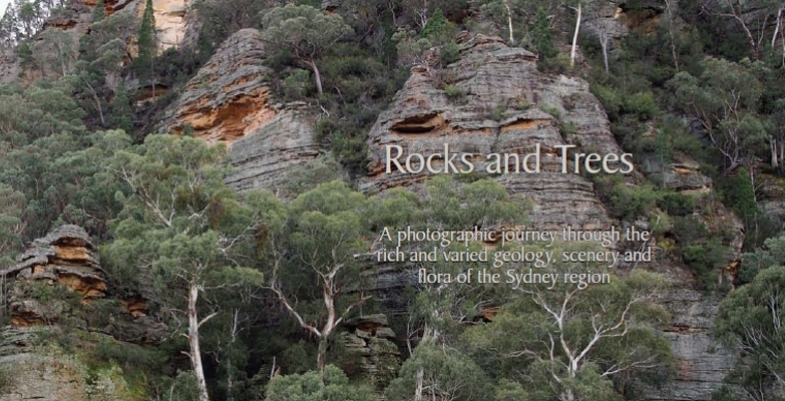 Such a simple title for such a comprehensive book – the subtitle ‘A photographic journey through the rich and varied geology, scenery and flora of the Sydney region’ elaborates on the topic of this lavishly illustrated volume.

More precisely, the work focuses on the Triassic sedimentary rocks of the Sydney Basin and younger volcanic and sedimentary deposits (including Jurassic diatremes and intrusions, Paleogene and Neogene basalt flows, and Cenozoic unconsolidated sediments) and the diverse flora these lithologies support.

Not since the compilation by Herbert and Helby (1980) – now out of print – has such a useful guide to the rocks of the entire Sydney Basin been published. The two publications are entirely complementary, with only the stratigraphic nomenclature for the Triassic succession and the geology of the younger rocks being common to both. In wanting to keep his book to a manageable size, Rocks and Trees barely touches on the underlying Sydney Basin Permian rocks that are covered in detail by Herbert and Helby (1980), whereas the geobotanical aspects explored in Rocks and Trees were never considered in the earlier publication.

A further obvious distinguishing feature is the prolific use of colour throughout Rocks and Trees, in which almost every page carries at least one colour image, be it of rocks, trees, flowers or even a butterfly. All photographs bear informative captions relating the landforms to the stratigraphy or intrusive unit, or the flora to the lithology. With the floral communities and the rocks they grow on being so extensively depicted in photographs taken by the author over 14 years, Rocks and Trees has definite appeal to anyone interested in geology or botany, or just keen on bushwalking.

John Martyn is a trained geologist, with 40 years fieldwork experience around the world. His observation of the wildflowers in Western Australia in full bloom sharpened his initial interest in the relationship between botany and geology. After moving to Sydney his love of bushwalking developed an appreciation of the differences in distribution of flora depending on their geological substrates.

There is clearly a need for such a book; as the author points out in the Introduction (p 7), botanists (particularly those investigating the Greater Blue Mountains World Heritage Area, which was nominated for World Heritage status on the basis of its botany, not – surprisingly – its geology and geomorphology) have identified and formally named floral communities such as Blue Mountains Shale Cap Forest and Shale Sandstone Transition Forest, recognising their links to the geological substrate (but not the precise geological formation). John also mentions the unfortunate misuse (not only by botanists) of informal terms such as ‘Wianamatta Shale’ that has crept into the literature in some popular guidebooks.

Dr Martyn opens his account of the geology of the Sydney Basin by firstly considering the geomorphology in a chapter on Landscapes and Panoramas. Several panoramic images are annotated with the names of prominent geographic features to help orientate the reader, and the location and viewing direction of many of these scenes are plotted on a simplified geological map of the Sydney Basin (p 27). Then follows a Geological Overview, including a brief discourse on the tectonic and structural history of the basin, before the main section (amounting to roughly half of the book) which progresses up-section through the Narrabeen Group, Hawkesbury Sandstone and Wianamatta Group.

The chapter on Jurassic igneous intrusions and diatremes follows, covering dykes, sills, laccoliths and various alkaline intrusions such as Mt Gibraltar, before documenting several of the better known diatremes. New distribution maps, adapted from the Sydney Basin 1:500,000 Geological Map compiled and published by the Geological Survey of NSW more than 50 years ago, accompany each of these chapters. Cenozoic volcanic activity at Mt Tomah and Mt Banks, Mt Wilson and Mt Hay, Nullo Mountain and Robertson Nature Reserve is dealt with in the subsequent chapter.

The next section focuses on the Lapstone Structural Complex and its geomorphological expression, and illustrates how the monoclinal warping and associated faulting has caused the development of lakes and swamps that support their own distinctive vegetation. Then follows a chapter (covering 40 pages) looking in some detail at Cenozoic sands, clays, gravels and laterites in the area of the Cumberland Plain (bounded by the Hawkesbury-Nepean catchment to the west and north) and extending to coastal dunes on the central coast, laterites at Long Reef and the Royal National Park south of Sydney.

And if by this stage the reader craves still more examples of the close bonds between rocks and plants, the illustrated part of the book concludes with a chapter on Rock-loving plants, featuring some exquisite rock orchids.

A Glossary of geological terms, listing of References and an Index provide the finishing touches.

I can thoroughly recommend this book. The text is engaging to those well-versed in geology and botany, but will also be readily understood by readers with only a rudimentary knowledge of rocks and trees. Though I have lived in the Sydney Basin for most of my life, and thought that I was reasonably well acquainted with the geology of the region, I was definitely impressed by the amount of new information that I gained in reading this volume, especially from the many photos of outcrops in places that I have not visited. Identifications of the trees, native shrubs and their flowers are an added bonus.

Although the A4 page size of the volume and its weight means that it is not the sort of book that can be readily carried around in a backpack or pocket, it can certainly be taken in the car to the field. Rocks and Trees is not a coffee table showpiece but rather a practical guide to understanding the relationship of flora to geology. It should certainly occupy a place on the bookshelf of any geologist (or botanist for that matter) living in the Sydney Basin or who visits the area regularly or occasionally.

John Martyn is an accomplished photographer and experienced author, having self-published several books previously (including Sydney’s Natural World, Field Guide to the Bushland of the Lane Cove Valley, and Understanding the Weather) through STEP Inc., a local community-based group concerned with (amongst other things) environmental education and the preservation of the natural habitat of Sydney’s upper North Shore. All his books are meticulously edited (by fellow members of STEP) and beautifully produced on high quality paper, and Rocks and Trees is no exception.

The price is another pleasant surprise: $60 plus postage. STEP members save 30%, reducing the cost to just $42. I understand the print run is not very large (certainly not in normal commercial quantities) so it would be worthwhile investing in this book now before it sells out. Order your copy now!