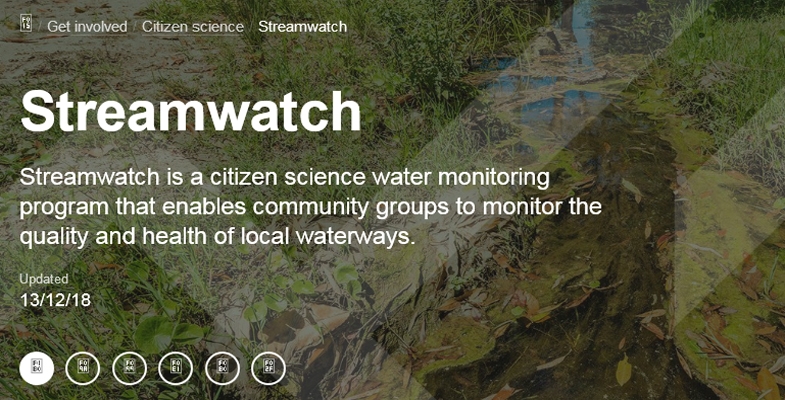 We have been alerted to a perplexing situation by a Streamwatch volunteer. Streamwatch was established in 1990 by Sydney Water and since has been managed by the Australian Museum which runs it under its citizen science programs.

Streamwatch volunteers monitor our waterways and deliver scientifically accurate data on water quality and biology, mentor students, alert authorities on pollution events, collect litter, provide biosecurity surveillance and provide a historical record of how waterway health has tracked over time. The program engenders understanding and stewardship of our bioregion's ecosystems.

And what does it cost to run? A mere $100,000 per year. It is an incredibly cost-effective program.

Recently the Australian Museum announced that it will no longer support the program and it appears that Sydney Water will cease funding after 30 June 2019. An Australian Museum spokesperson said the museum is committed to identifying a new organisation to take over operation of the project by July 2019 but, if future funding is not assured, it will most likely close down.

Streamwatch is so much more than a data collecting exercise, in fact it's so much more than a typical citizen science program. People may think that between Sydney Water, OEH and the EPA, Sydney's freshwater systems are monitored and protected but these authorities cannot be everywhere. Streamwatch has repeatedly been the first alert organisation for pollution events. Skilled members of the public perform a brilliant service to the community. The scheme also gives school children an opportunity to engage in real hands on science.

The Australian Museum currently has around 170 volunteers testing at 160 sites in Sydney, the Blue Mountains and the Illawarra. Streamwatch groups are made up of community volunteers, TAFE and university students, council staff and high school teachers. In the last 12 months alone 796 data sets have been uploaded to the Streamwatch database making almost 5000 data points.

Streamwatch volunteers have started an online petition calling for the NSW government to ensure that the program continues. Please sign the petition.