What Plastic is doing to Marine Life

The impact on marine life from plastic may be most obvious in coastal regions, but in August CSIRO released the results of the first analysis of the threat posed by plastic pollution to pelagic bird species worldwide. The report is published by the National Academy of Sciences of the US. 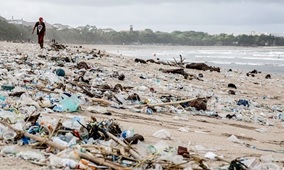 The study examined scientific research since the 1960s into seabird deaths. The analysis of published studies showed that the amount of plastic in seabirds’ stomachs has been climbing over the past half-century. In 1960, plastic was found in the stomachs of less than 5% of seabirds, but by 2010 this had risen to 80%.

The researchers then used a statistical model to predict that by 2050, more than 90% of the world’s seabird species will be accidentally eating plastic, unless action is taken to clean up the oceans.

Why so much more plastic? Global plastic production is increasing exponentially, with a current doubling time of 11 years; thus, between 2015 and 2026, we will make as much plastic as has been made since production began.

What damage does plastic do to seabirds?

The research team had previously found nearly 200 pieces of plastic in a single seabird. These items include a wide range of things most of us would recognise: bags, bottle caps, bits of balloons, cigarette lighters, even toothbrushes and plastic toys. Seabirds can have surprising amounts of plastic in their gut.

Working on islands off Australia, the study found birds with plastics making up 8% of their body weight. Imagine a person weighing 62 kg having almost 5 kg of plastic in their digestive tract. And then think about how large that lump would be, given that many types of plastic are designed to be as lightweight as possible.

The more plastic a seabird encounters, the more it tends to eat, which means that one of the best predictors of the amount of plastic in a seabird’s gut is the concentration of ocean plastic in the region where it lives.

Surprisingly, CSIRO study found that the area with the worst expected impact is at the northern boundary of the Southern Ocean and the Tasman Sea, between Australia and New Zealand. This region is far away from the subtropical gyres, dubbed ‘ocean garbage patches’ that collect the highest densities of plastic. Although this area has low anthropogenic pressures and concentrations of marine debris it also has a diversity ingestion prone seabird species.

Ingestion is known to have many effects, ranging from physical gut blockage to organ damage from leaching toxins. There is a vicious circle. Birds lose condition because the weight of the plastic in their gut creates the impression they have eaten enough. They don’t receive the nutrition needed to travel the long distances necessary to find sufficient food.

A possible example of the impact of plastic ingestion is the experience in spring 2013 of a high level of short-tailed shearwater (mutton birds) deaths (known as a wreck). Large numbers of dead or dying birds were found washed up on beaches from the Gold Coast to Tasmania.

These birds migrate 15,000 km from the Bering Sea, between Alaska and Japan, to Australian shores in late September to nest. Seabird biologist, Dr Jennifer Lavers from Monash University has studied these birds. In a Sydney Morning Herald report she said they had eaten little on their journey and were exhausted by the flight.

She said it was normal for wrecks to occur every 10 years, and this usually indicated a particularly poor year for the birds with storms or no fish available on arrival. However, major wrecks had occurred every second year since 2007, pointing to a wider problem with implications of a future major reduction in the population. She wondered if the ingestion of plastic was another factor.

Dr Lavers has also studied flesh-footed shearwaters (Puffinus carneipes) on Lord Howe Island and found that 90% contain plastic. In 2011, one chick was found to have more than 275 pieces of plastic in its stomach (equivalent to an average human ingesting 10 kg of plastic). Chicks that ingest large amounts of plastic have poor body condition and are likely to suffer reduced juvenile survival. Not surprisingly, flesh-footed shearwater populations on Lord Howe Island and in New Zealand have declined significantly over the past few decades.