Restoration of an Environmental Jewel

This article has been written by Frances O’Brien, Group Administrator at Wahroonga Waterways Landcare. The site is part of SAN Wahroonga Estate redevelopment that was approved in 2010 after three years of consultation.

STEP was actively involved with this process which, together with submissions from Ku-ring-gai Council, other environment groups and 160 individuals, led to a significant reduction in the number of proposed residential dwellings, and relocation of parts of the school. The development footprint was scaled back so that the amount of conservation land was increased from 18 ha to 34 ha.

As the article highlights, the Wahroonga Estate contains some magnificent bushland including endangered ecological communities such as Blue Gun High Forest and Sydney Turpentine Ironbark. The original plan that was modified included residential development on the east side of Fox Valley Road. This area has one of the finest examples of vegetation transition from shale to sandstone in northern Sydney.

Between the busy thoroughfares of Pennant Hills Road and The Comenarra Parkway, in a valley carved by the tributary of the Lane Cove River, lies a 34 hectare stretch of E2 Environmental Conservation zoned bushland. From the slender headwaters in Nanowie Reserve to the rush under the Comenarra Parkway into the Lane Cove National Park, Coups Creek has some remarkable characteristics.

It is home to some of the best remnants of Sydney Turpentine Ironbark Forest and Blue Gum High Forest, whilst the banks of Coups Creek are lined with Kanooka (Tristaniopsis laurina) and Bleeding Hearts (Homalanthus nutans).

The land is privately owned by the Seventh-day Adventist Church, but is open to the public and maintained by the Grounds Team of Adventist Aged Care (AAC) Wahroonga and the volunteer group Wahroonga Waterways Landcare.

Every week, the many walking trails that wind between the Angophora, over secret creeks and through orchards of Kangaroo Apple (Solanum aviculare) are patrolled and re-laid with mulch so that local walkers may enjoy the natural environment. 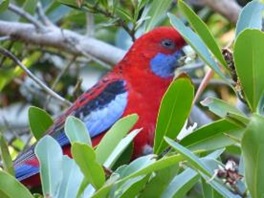 Humans are not the only visitors. A pair of Powerful Owls (Ninox strenua) have taken up residence in some of the tallest trees and may occasionally be seen glaring sleepily down at walkers during the day. Coups Creek reverberates with the knocking of Striped Marsh Frogs (Limnodynastes peroni) and creaking of Eastern Dwarf Tree Frogs (Litoria fallax). The surrounding eucalypts ring with the varied whistles of the Australian King Parrot (Alisterus scapularis), and Variegated Fairy-wrens (Malurus lamberti) and Eastern Yellow Robins (Eopsaltria australis) chirp from Pittosporum.

The bushland did not always enjoy such good health. Colonial logging of Scented Satinwood (Ceratopetalum apetalum) for flooring, furniture and building of coaches (hence the other common name, Coachwood), allowed weeds such as Lantana, Privet (Ligustrum spp.), Heartseed Vine (Cardiospermum grandiflorum) and Asparagus to infest the bush, pushing aside native species.

It is through the efforts of Wahroonga Waterways Landcare and AAC’s Grounds Team that the condition of the bush has been vastly improved. The walls of Lantana have been pushed back to give space to native raspberry (Rubus spp.) and over 20 species of tiny orchids, including the Dainty Bird Orchid (Chiloglottus trapeziformus), the delicate Pixie Orchid (Acianthus fomicatus) and the Slender Hyacinth Orchid (Dipodium variegatum). 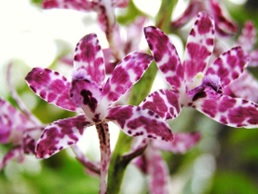 Aside from clearing weeds and mulching the walking tracks, the AAC team has installed small educational signs along the tracks to inform walkers of a particular species or location. Wahroonga Waterways Landcare has installed a community noticeboard near Elizabeth Street, which displays a map of the site and notices for upcoming events.

Wahroonga Waterways Landcare is most active through education. The group frequently runs educational tours for the community and for local schools on topics of climate change, environmental management, stormwater control and ecology. This program has been popularly received by schools, Duke of Edinburgh participants and Scouts for the hands-on approach and diversity of the surroundings.

Establishing the group was simple. Landcare Australia is always open to new groups and individuals keen to take on bushcare, streamcare, cragcare, trackcare, and all the other varieties of environmental care that can possibly be thought of. After speaking with locals walking through the bush and promoting AAC’s work, several parents approached the team, asking for supervision for their children undertaking the Duke of Edinburgh program. A volunteer group was established to focus on this community work, and to formalise its activities the regional Landcare group (in this case, what is now Greater Sydney Landcare) was contacted, and Wahroonga Waterways Landcare was registered.

Members of the public are always welcome to visit Coups Creek, as long as they keep to the trails, take their rubbish with them, and leave the natural habitat undisturbed; as they say – take only photographs, leave only footprints.

Those interested in volunteering or more information can contact the Group Administrator, This email address is being protected from spambots. You need JavaScript enabled to view it.. 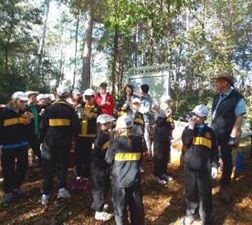