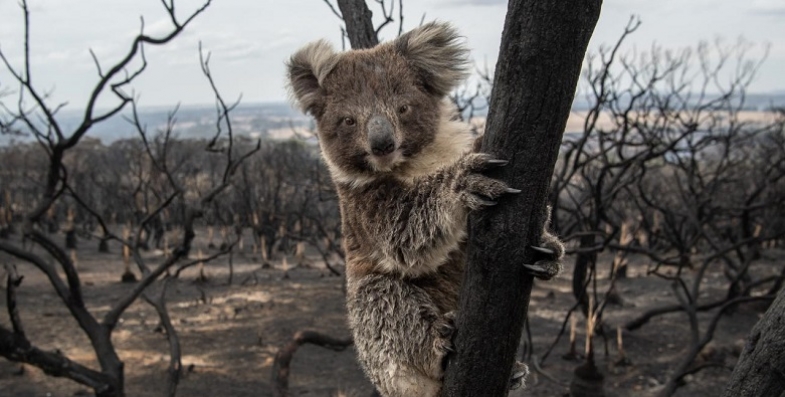 The decline in koala numbers in NSW has been highlighted over many years by environment groups. The major causes have been land clearing for agriculture, forest logging and urban development. A significant part of koala habitat in NSW is in state forests or private land. The forests will recover after the fires but in the meantime the precarious situation for koalas will worsen.

Before this summer’s bushfires, koala populations in NSW and Queensland had already dropped by 42% between 1990 and 2010, according to the federal Threatened Species Scientific Committee.

The mid-north coast is home to a significant number of Australia’s koalas, with an estimated population between 15,000 to 28,000. It is estimated that 30% of their habitat was destroyed in the November/December fires in that area.

NSW Forestry Corporation is still logging unburnt koala habitat in state forests. It is believed that the NSW Government is planning on privatising the Forestry Corporation. The initial focus will be on selling softwood plantations but, as the organisation shrinks, the rest of the organisation will be regarded as uneconomic and the native forests will be next. It is reasonable to expect that private owners are likely to expect a higher profit and hence more rapid harvesting. The principle of sustainable harvesting has been compromised before.

The major clearing is occurring in the inland woodlands where the push is for agricultural development. Grazing land can allow for trees to be retained to shelter stock and provide bird habitat. The push has been to total clearing to make it easier for machinery to plough, plant and harvest vast swathes of land. The value of this cleared cropping land increases dramatically. What will its long-term value be when the nutrients and carbon in the soil have been blown away in dust storms?

As for clearing for urban or tourist development, the State Environmental Planning Policy (Koala Habitat Protection) 2019 has been changed recently. It clarifies the definition of core koala habitat and increases the number of tree species that can be used to identify koala habitat from 10 to 123. 99% of identified koala habitat on private land in NSW was at risk of being cleared before these changes and that remains the case.

On a more hopeful note the NSW Government has allocated $20 million for the purchase of private land that is core koala habitat to be converted into the reserve system. The NSW Koala Strategy is part of a long-term vision to first stabilise, then increase, koala population numbers across the state. Through many of its actions, it will also contribute to protecting other threatened species.

The NSW Government has committed $44.7 million to support the implementation of the NSW Koala Strategy.

With the sudden loss of so much koala habitat the logging contracts must be reassessed. There is talk that the numbers of koalas killed has tipped the population into the threatened category. It is hoped that the population assessment is made before the loggers can move back in to unburnt habitat.