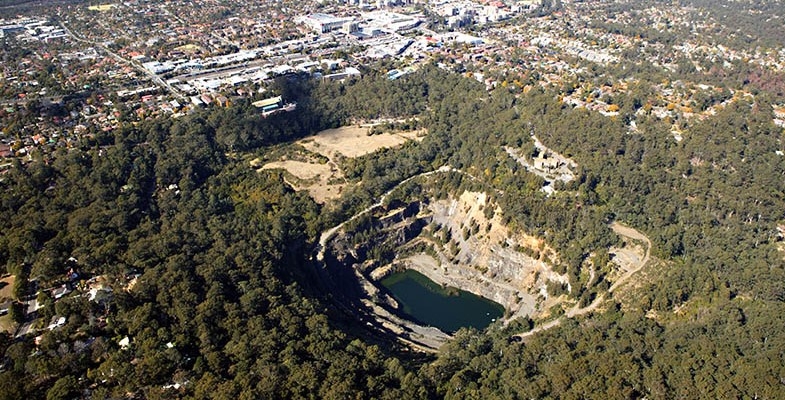 The process of partially filling in the void that was Hornsby Quarry using spoil from the excavation of the North Connex road tunnel has been completed. Hornsby Council is now planning the next stage to create a recreation area that comprises Old Man’s Valley below the swimming pool, the Quarry and its surrounding area.

Some of the steep sides of the Quarry, particularly the northern side, are unstable and could collapse in a major rainfall event so rehabilitation works are required. Reshaping of the North Connex fill is proposed, as well as other spoil mounds within the site to allow future development of the quarry into a parkland for community use. These works have to go through a Development Application (DA) process including consideration of public submissions.

Hornsby Council has undertaken public consultation using public displays of the plans and put documents on exhibition. There are futuristic illustrations of the potential use of the site but this level of detail will be in the next stage of consultation.

Representatives from three geological societies made several submissions about the lack of recognition of the scientific significance of the volcanic diatreme rockface that is exposed by the quarry excavation. The outcomes of the final filling and landscape works on the floor of the quarry were not explained so it is not clear how much of the rock face would remain visible.

The people who had made submissions were delighted with the result. The Panel noted that several key issues of significant public interest were unresolved, and the development’s conditions did not provide necessary certainty of the outcomes for the Panel or for the public.

The Panel deferred the application so that the following processes can be completed:

Another process of consultation will occur when the required documents are completed.

A subsequent visit by Geological Society of Australia members with council officers provided an indication that there is likely to be more of the diatreme rock face exposed, not less. So good news.