Ku-ring-gai Council has received considerable flak over a decision to close an unauthorised mountain bike track down a steep hill below the tennis courts near Warrimoo Oval, St Ives. 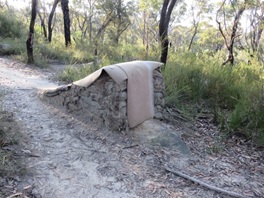 This track can only be ridden in one direction – downhill. In other words it is designed for thrills. Another route, the Harbour to Hawkesbury management trail, is used to get back up to the top of the hill. There is no signage to warn unsuspecting walkers coming from the trail below that they are entering a downhill bike track. There is also little signage to warn riders themselves of hazards.

Speeding riders (as demonstrated by videos on YouTube) would have no opportunity to appreciate the beautiful bushland as they negotiate the track. On the day we looked at the track the wildflowers were magnificent.

The reasons for the closure explained by council include: 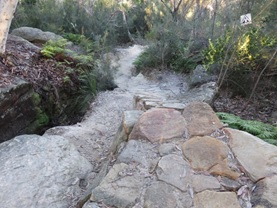 Council is discussing possible alternative sites for a track with mountain bike groups.

STEP supports the track closure. This is another example of unauthorised bike track construction that has damaged urban bushland. If council lets the local enthusiasts get away with this track, they will be emboldened to build more.

Bike groups seem to think that the popularity of mountain bike riding justifies their creation of new riding tracks. They ignore the bushland preservation rules that have been legislated after much scientific analysis and community consultation. The bushland is preserved for many reasons. It is under considerable pressure from urban development. Illegal bike tracks add a major source of damage.

The National Parks Service has spent close to a million dollars building the new tracks (Gahnia and Serrata) in Garigal National Park and devoted many hours of staff time managing and monitoring the tracks. They are now spending more to close unauthorised tracks in the area that have damaged aboriginal engraving sites and coastal upland swamps. We hope that the mountain bikers will appreciate this facility and the money that has been and is still being spent for their benefit. The time and money spent on walking tracks per walker would be tiny in comparison

As our Position Paper on Bushland Tracks and Trails argues, bike riding should be confined to bushland management and other authorised trails where damage from the introduction of pathogens and weeds and soil erosion can be controlled.

There was an interesting program on ABC Radio National last month highlighting the damage caused by unauthorised trail construction plus the general issues of encouraging bushland appreciation without causing degradation.