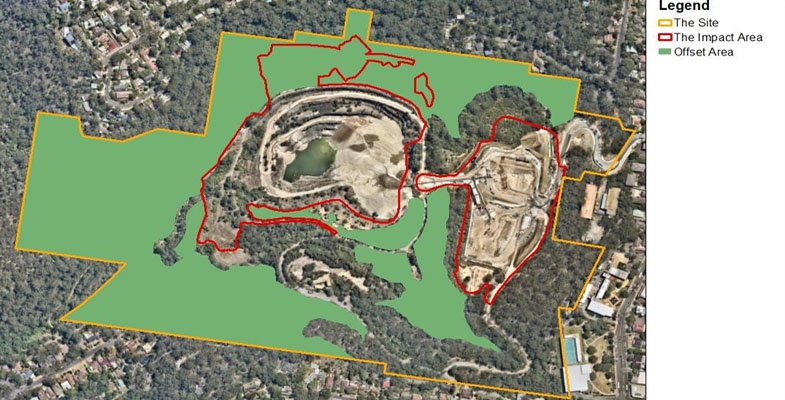 The panel found that more information is needed and deferred the application so that the following detail can be completed and made public for further consultation:

This information has now been published and further submissions could be made up to 21 August. Another panel hearing will be held in due course.

The development involves the clearing of some areas and the replanting or restoration of other parts. The development assessment concluded that there will be a residual impact on biodiversity values that need to be offset.

Three options were considered. One option was to use offsets from another site. This is what we were most concerned about. The good news is that priority has been given to offsets that can occur around the quarry and surrounding bushland. This land will be managed as part of the VMP. In-perpetuity protection of the offset areas will be provided by a Voluntary Conservation Agreement which will comprise the offset area and additional lands managed under the VMP.

There is one concern that funding has not been specifically allocated for the VMP so its sufficiency is not certain.

STEP would like to have seen a VMP that is more progressive in recognising the resilience benefits of selecting plants from nearby areas outside Hornsby Shire with similar soils or more likely to cope with changing climate or could have been present before the quarry area was developed but have since disappeared.

A staging plan has been completed highlighting earthworks that will not be undertaken within the recommended Powerful Owl exclusion zones if a breeding pair are occupying a nest on site. Post works habitat creation and appropriate vegetation management practises are also stipulated in the VMP.

The Powerful Owl Coalition is concerned that the language in the documents is not strong enough. Words like ‘should’ are used when the particular actions are a ‘must’.

3.   Recognition of the scientific value of the ‘Jurassic’ diatreme rock face

Ian Percival from the Geological Society of Australia toured the site with council officers. In a follow-up letter he explained that the society’s concerns have been addressed. The proposed level of the quarry floor in the redevelopment will be entirely comparable with the exposure more than four decades ago. The letter states:

It is apparent that council now recognises the geoheritage significance of its own ‘Jurassic Park’ (a reference to the known age of the diatreme) which is right in its backyard. As the centrepiece of the redevelopment of the old Hornsby Quarry it will no doubt be a remarkable tourist drawcard if properly protected, allowing public (and restricted research/educational) access with suitable interpretation.