Why we Should not Fear the Aging Population 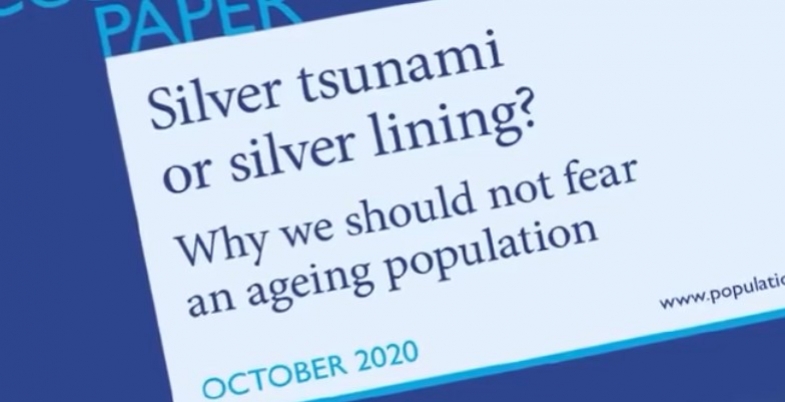 Sustainable Population Australia (SPA) is an independent not-for-profit organisation. They work on many fronts to encourage informed public debate about how Australia and the world can achieve an ecologically sustainable population.

SPA has recently published a discussion paper titled Silver tsunami or silver lining? Why we should not fear an ageing population by Dr Jane O’Sullivan who is Honorary Senior Research Fellow at the University of Queensland School of Science.

The paper dispels the myths about the need to have high population growth in order to maintain Australia’s economic wellbeing. Fears are often expressed by politicians and economists that an ageing population will make health and aged-care costs unaffordable and we will not have enough workers and tax-payers. The main points from the paper are summarised below. Please read the paper to see the comprehensive discussion of these issues.

Like all developed countries we have been going through a demographic transition since early in the 20th century. In those days high birth rates were countered by high mortality including at infant ages. Since the increase in life expectancy arising from the development of antibiotics, vaccines and medical technologies, births have been exceeding deaths even though family sizes are now smaller. Now the average age has risen and will continue to rise in line with the increased longevity. This demographic ageing represents the final stage of the inevitable demographic transition that will lead to a stabilisation in the total population numbers and age distribution unless a high level of immigration is added.

The discussion paper includes projections comparing the proportions of the population in the working age bracket as usually chosen by statisticians (age 15 to 64) and those aged 65 and over, now and into the future and then adds the effect of immigration to project the age composition at the stabilisation point. They show that the proportion of people aged 65 and over is likely to be in the range of 30 to 35% but will never outnumber the working age population. Currently Australia’s population aged 65 and over is 16% compared 65% in the age 15 to 64 bracket.

Boosting population growth does not solve ageing, but is ageing a problem anyway?

Immigration, by bringing in more ‘working age’ people, will delay the stabilisation process. The paper goes on to look at the effects of a range of growth levels (natural increase plus net immigration) that are summarised in the table below (copied from the discussion paper). Growth is defined as a percentage of the then current population. For example, recent growth of 1.6% equates to the need to provide housing and services for an extra 400,000 pa. When population grows to 40 million, which could happen by 2050 if growth returns to recent levels, there would be an extra 640,000 people to accommodate.

Fig 3C shows the costs of provision of population based necessities such as health, aged care, education and infrastructure, as a proportion of GDP. This data is the essential part of the paper’s arguments that growth comes with a significant cost.

The cost of population growth exceeds the cost of ageing

As Fig 3C shows, immigration is expensive. The cost of extra infrastructure to support population growth outweighs the small extent to which that population growth could lessen relative pension, health-care and aged-care costs. A figure of $100,000 is quoted as the infrastructure costs of each new resident. Most of this infrastructure cost falls to state and local governments, and private individuals, rather than the federal government. The national interest should not be narrowly defined as achieving a balanced federal budget while the states are having to increase their revenue raising to provide new infrastructure.

The paper concludes that high levels of immigration can slow, but not prevent, population ageing. But the cost of extra infrastructure and education to sustain population growth is greater than the avoided costs of pensions, health care and aged care.

Will we run out of workers and taxpayers to support the non-workers?

One of the main arguments for increased population is the dependency drag on the economy. This ‘dependency ratio’ assumes that those over-65 depend economically on people aged 15-64, and that there will not be enough people of ‘working age’ to perform all the required work.

The paper presents the argument that there is no evidence that boosting the working-age population has increased employment per capita. Instead, Australia’s labour market has been oversupplied, with high immigration contributing to youth underemployment, wage stagnation and rising inequality through increased housing costs.

Many European countries with slow population growth have higher productivity growth and youth unemployment than Australia.

With the same demand for workers but fewer working-age people competing for jobs, there is less unemployment and underemployment. Improved wages and conditions attract more people into the workforce. This is what economic theory expects the labour market to do. But the economic models which predict that ageing will constrain the workforce have ignored these feedbacks.

The paper found no credible evidence that ageing will constrain Australia’s workforce, productivity or GDP. Tax contributions per adult would increase due to higher wages and workforce participation. In contrast to the common claims of a fiscal burden, they anticipate a fiscal dividend.

While aged care and health care will likely increase as a share of national spending, the rise will be much smaller than the rise in number of retirees because older cohorts are getting healthier and better services are extending their independence. The major increases in health costs have been due to new, improved and more services per person. Longevity has deferred, rather than extended, the period over which the elderly need more health care and aged care.

There is not enough room here to summarise the detailed discussion in the paper on issues such as taxation, retirement incomes and intergenerational equity and the myths trotted out by the growth lobby. This lobby, including the likes of demographer Liz Allen from ANU and the Scanlon Foundation are comprehensively debunked by this paper.

Those with vested interests in population growth have overstated ageing concerns, to make high immigration seem essential. The resulting negative social and environmental impacts continue to accumulate for no net economic gain.

The paper concludes that an older, numerically stable or decreasing population offers many benefits for quality of life, environmental sustainability and economic stability. Depopulation dividends could make us richer, smarter, safer, fairer, greener, healthier and happier. 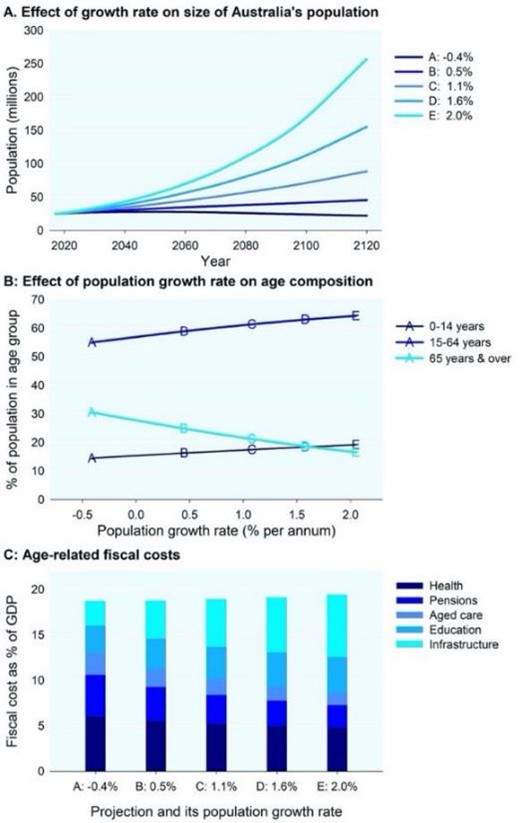 Fig 3B shows that if our population grew at 2% per year (projection E), we could keep the proportions of children, 15-64 year-olds and over-65s roughly the same as we currently have (until we are too overpopulated to keep growing).

But, as Fig 3C shows, the cost of infrastructure and education to support this growth outweighs any benefit from lowering costs related to elderly citizens. On the other hand, if we had no population growth, or even a gentle decline, then there would be a higher proportion of older citizens, but the savings on infrastructure and education would pay for the increase in pensions, health care and old-age care.

Tweet
Published in STEP Matters 208
Tagged under
back to top