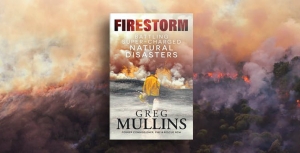 Between July 2003 and January 2017 Greg was Commissioner, Fire and Rescue, NSW. Being a former employee is an advantage when he speaks out publicly because public servants are not so encouraged. He is the person who organised Emergency Leaders for Climate Action (ELCA), a group of 34 past fire chiefs and experts who implored our Prime Minister to meet with them and understand the predictions for the 2019-20 fire season. Self-funded, they eventually managed a meeting with Ministers Taylor and Littleproud after some adverse media coverage.

This is an exciting adventure story of a local young man fighting fires all around Sydney’s North Shore, until chapter four. He applied for and received a Winston Churchill Memorial Trust Fellowship, as government agencies have no funds for R&D overseas travel, and observed bushfire control in England, France, Spain, Canada and the USA.

Californians do it in style! Within hours a small town would be set up: command units, catering units, shower and toilet bocks, busloads of experienced firefighting prisoners, T-shirts naming the fire for sale; and of course water-bombing aircraft and experts form Alaska, Colorado and Florida. The Oakland Fire Department had a novel prevention strategy, namely, that homeowners with a heavy fuel load could hire a ‘goat man’ to lose his herd of goats to effectively eat the fuel.

Throughout the book Mullins notes changing weather conditions in Australia and around the world. People have to accept that what worked in the past will not suffice in the hotter, drier future. Following the 1994 fires, a fire brigade station officer brought us the community fire units so familiar to us around the suburbs.

Enabling homeowners to wet down the bush, prepare their homes and emerge after the fire to put out small fires and embers, community fire units were decisive in the 2002 fires in Lane Cove in saving houses.

It is not the ‘much-derided so-called greenies who are the real canaries in the coal mine…it’s our farmers and primary producers’ [p145]. They suffer first from climate change. The account of ELCA’s attempts to meet with the Prime Minister from April 2019 made my hair stand on end. The Murdoch press personally attacked Greg Mullins and the former Queensland Fire and Emergency Services Commissioner; the federal government held back two tranches of funding until December and January when it was, of course, too late to source additional aircraft from overseas. Even then-current Commissioner of the NSW Rural Fire Service, Shane Fitzsimmons, was vocal, and noted that the PM had not warned him of unilaterally calling out army reservists to help fight the fires.

Mullins debunks the five biggest myths promulgated on social and other media destined to deflect attention from worsening climate change: in fact, Greenies never had control of decision-making on hazard reduction burning; we have not had weather conditions like this before; arsonists did not cause those fires; grazing in national parks does not reduce fuel loads - cows don’t eat many branches, twigs, bark, eucalyptus leaves and bark; we have not had worse fires before. Mullins then tells what the experts really said, basically that climate change is exacerbating fire danger.

He gives short, medium and long term directions to save ourselves. Some are as obvious as mandatory smoke alarms; cigarettes that self-extinguish in dry grass; and sprinkler systems in aged care facilities.

Unfortunately the book has no index. However, dates and names are precise; there are 109 references as well as appendices on factors affecting fires, fire dynamics, and finally, a word on how the ANZACs might view our disregard for facts.