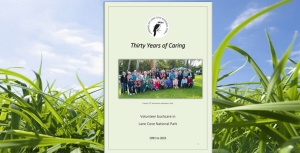 The Friends of Lane Cove National Park were planning to hold a celebration this year commemorating 30 years of volunteering in the Park but COVID-19 stymied that plan. However Mike Pickles and David Meggitt have compiled a booklet documenting the achievements of the volunteers Thirty Years of Caring: Volunteer Bushcare in Lane Cove National Park.

It includes a history of the northern Sydney Bushcare movement from its beginnings in the 1960s. The techniques were formalised by publications such as Joan Bradley’s Bringing Back the Bush and Robin Buchanan’s TAFE sponsored textbook that became the reference (and still is) for all trainees.

In Lane Cove National Park, a series of working bees were held in the early 1990s and these evolved into the creation of the Friends thanks to the initiative of Nancy Pallin and Nan Goodsell. The creation of this organisation facilitated the ability to apply for government grants.

The first meeting was held in January 1994 and a week later one of Sydney’s worst bushfires occurred and 85% of the park was badly burnt. This led to a large influx of volunteers eager to help restore the park and the Volunteer Bush Regeneration Program was created. This program is still going strong.

The booklet chronicles the activities and personnel involved with the Friends, including the great support from the NWPS staff. It also provides a profile of each of the 27 Bushcare sites that are still functioning. 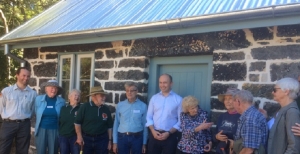 The occasion was also the official opening of Jenkins Kitchen after its restoration using a NSW government Heritage Near Me grant and resources from the Friends, their time and money, to restore the interior and set up displays of historical and wildlife items. The building built in 1855 is believed to be the oldest in Ku-ring-gai.