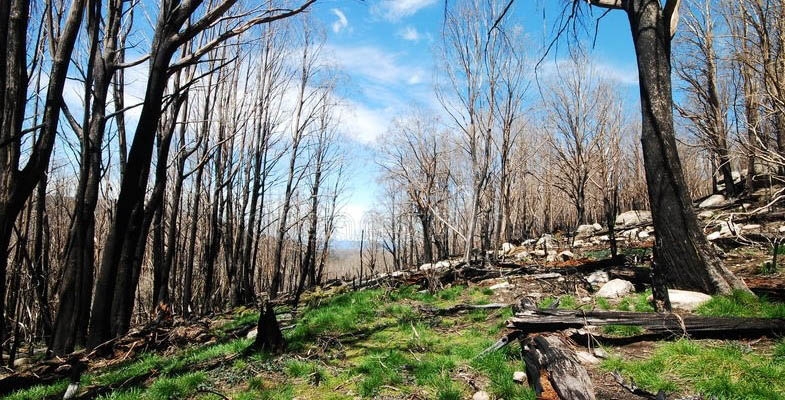 This article is based on recent visits by John Martyn to two different burnt areas, the Blue Mountains and the Mitchell Crescent side of Twin Creeks Reserve and is a summary only of a complex situation: of course we must await and monitor the long-term consequences.

The southern edge of the Gospers Mountain megablaze complex impinged on Blackheath, but a spring hazard reduction burn of the bushland south-west of Mitchell Oval, Turramurra, gave those of us living downwind of it a feeling of security whilst watching the January carnage elsewhere on ABC TV. Regrowth by coppicing, sprouting from tuberous rootstock and germination is obviously time related, and is relatively advanced at Mitchell Crescent, but is widespread too in the Blue Mountains after relatively few weeks. The article is illustrated with a small selection from numerous pictures.

We stayed in Blackheath over the weekend of 8 February (talk about a ‘wet weekend’ probably the wettest in recent history). Torrential rain and gale force winds made observations difficult, but from glimpses through the fog it was apparent that fire intensity in the Grose Valley was strongly variable and slope related. The canopy in the valley bottom was widely unburnt even though the ground flora and understory were brown and charred. Some eucalypt canopies were even in flower though it was hard to tell what species through the mist.

The wooded rocky slopes, cliffs and ridge crests were completely charred, however. Trees on ridge crests are generally shorter, and coupled with high fire intensity burning uphill, most canopies didn't survive. Many such trees however were bursting with epicormic shoots, and the charcoal-strewn ground was peppered with green shoots of rushes and sedges, even some grasses. Most if not all of the numerous tree ferns at Govetts Leap were bursting with lush new green crosiers (pictured) and some ground ferns like gristle fern were also flush with new leaves from their underground rhizomes.

This local hazard reduction burn left large areas of canopy untouched so total loss of foliage was restricted to shrubs and small trees, plus ferns and ground flora. In the broad sense, eucalypts were relatively unaffected, and short species that did get burnt, like dwarf apple Angophora hispida, are mostly bursting with new growth.

Many Proteaceae species have coppiced or re-shooted. We saw banksias B. oblongifolia and B. spinulosa coppicing readily while one large B. serrata was flush with epicormic shoots. Other proteoid re-sprouters were mountain devil Lambertia formosa and crinkle bush Lomatia silaiifolia.

The fire was limited by the northern valley track downhill from the bottom of Mitchell Crescent, but singed the edge of the valley rainforest and riparian understory. Young specimens of coachwood Ceratopetalum apetalum, white cherry Schizomeria ovata and scentless rosewood Synoum glandulosum show flourishing coppicing. The two other main rainforest species of the valley, Lillypilly Acmena smithii and sassafras Doryphora sassafras were out of reach of the fire, as were most grey myrtles Backhousia myrtifolia. Essentially riparian species like black wattle Callicoma serratifolia have coppiced strongly where burned.

Some surprises maybe, maybe not: the pea flower Platylobium formosum was seen re-shooting, as was one black sheoak Allocasuarina littoralis too.

Ferns like rainbow fern Calochlaena dubia and gristle fern Blechnum cartilagineum have widely recovered, and there are many pinnate seedlings of unknown wattle species plus twiners like Hardenbergia violaceae. The latter will create carpets of purple in a couple of years’ time, perhaps with a sprinkling of ground orchids in season. 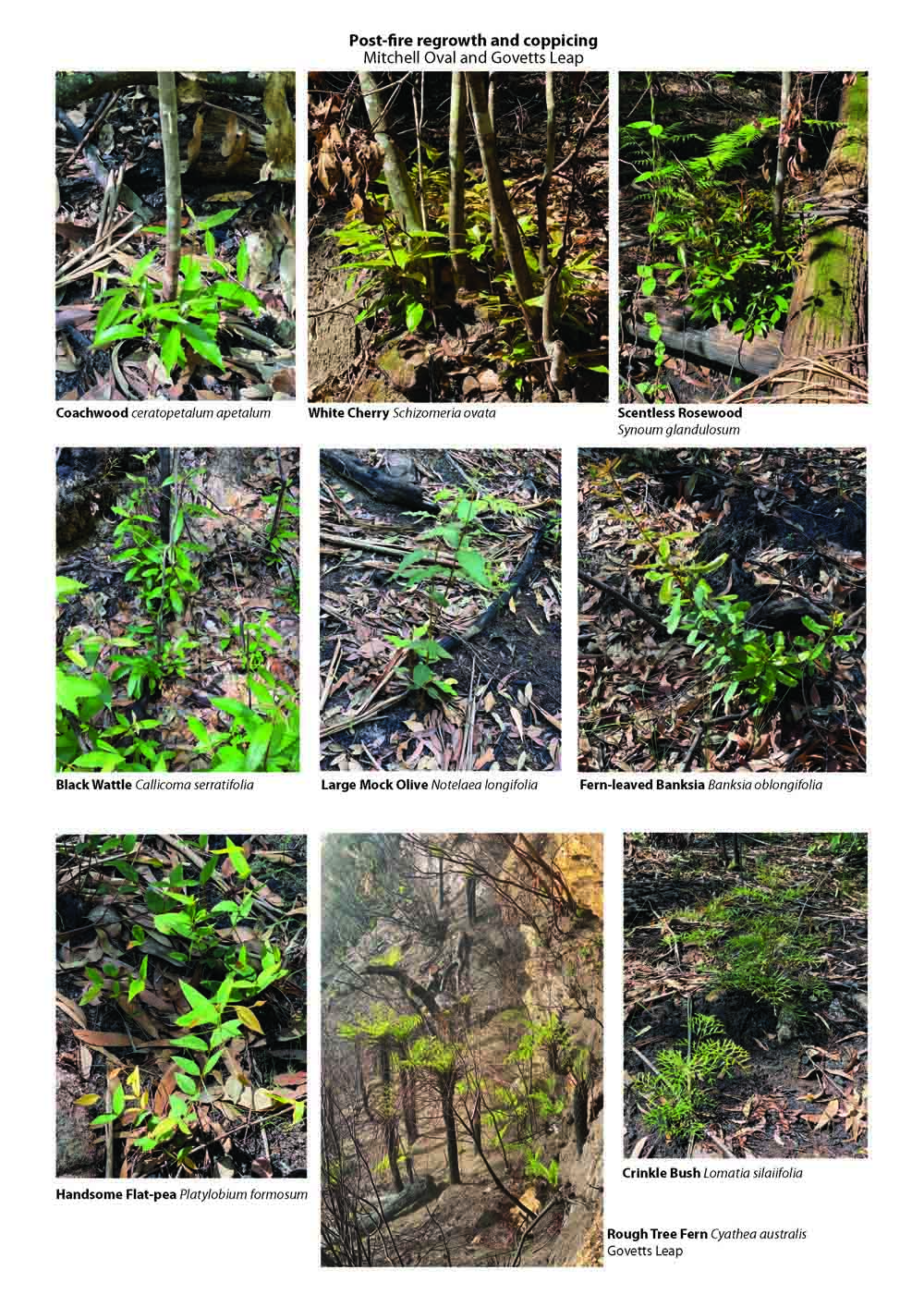