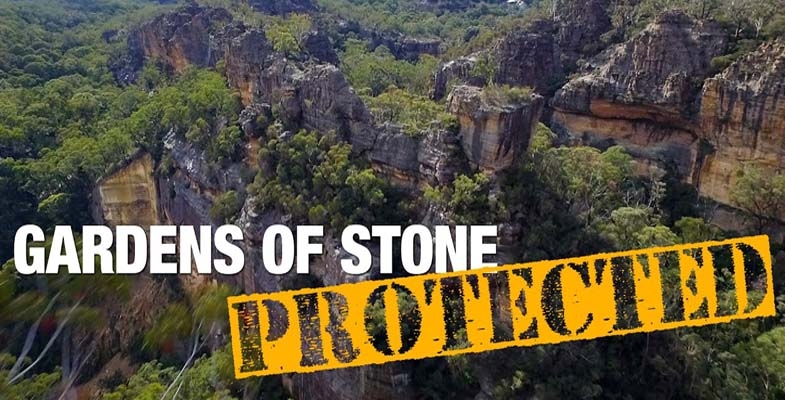 After 90 hard years of campaigning the NSW government has finally decided to declare some protection for the Gardens of Stone. The ideal would have been the creation of a national park but a state recreation area is a start. Here is some history:

The total 30,000 ha of land to be protected has been drawn from several state forests and crown land. It includes threatened ecological communities such as upland swamps and box woodland and several rare and threatened species.

The campaigners have worked with the local Lithgow community, council and politicians to demonstrate the benefits of making the Gardens of Stone a tourist destination. Mining jobs will be replaced by new employment in the Lithgow area. The NSW government has come up with some financial support with $50 million for management and upgrades.

The drawcard is the amazing rock formations called pagodas that dot the landscape, with gorges, canyons and waterways winding between them. There are valleys with lush rainforest and high-country woodlands, including patches of snow gum. There are amazing wetlands that support unique wildlife like the giant dragonfly.

A state conservation area does not prohibit mining in the way that a national park declaration does. While Centennial Coal has withdrawn its proposal to expand the Angus Place coal mine, it still wants to extract coal and has submitted a new proposal to mine underground at Angus Place West. The prospect of more coal mining will be opposed strongly by conservation groups but at least the Gardens of Stone will not be affected.

The tourism developments include:

The challenge will be the potential damage from the expected influx to areas such as the Lost City and other rock formations, as well as indigenous rock shelters and other heritage. The design of these projects and management must give priority to protection of this unique area.

Haydn Washington has written about the history of the campaign, which you can download and read at your leisure History of the Campaign for Gardens of Stone from 1980 to 2021.